Can VR, AR and MR be the future technologies for Accounting? 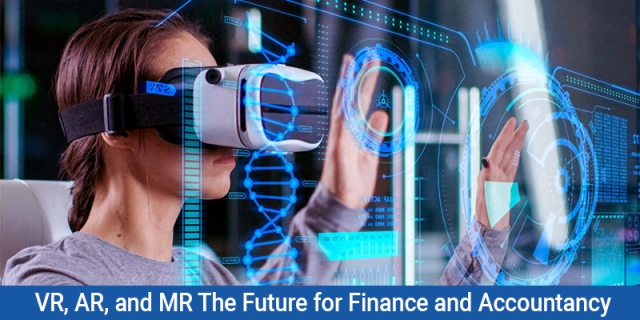 When people think of Virtual Reality, Augmented Reality, and Mixed Reality, they generally portray gaming in their minds. But the real potential of VR, AR, and MR has not been exposed yet. Few of its applications have already been used in domains like Healthcare, Space Exploration, Tourism, Entertainment, etc, but what about Finance and Accounting? This sounds something different. Let us start with understanding What is Virtual Reality, Augmented Reality, and Mixed Reality?

What is Virtual Reality (VR)?

The basic idea of Virtual Reality is to present something which is not present there. It creates an illusion for a person to see or feel as if they are present somewhere else. VR simulates a realistic environment for the user. Here, a user can see around in various angles providing a view-field of almost 360°. VR is an interactive and computer-generated experience taking place within a simulated environment.

It’s a rapidly growing computer interface that strives to immerse the user completely into an experimental simulation, thereby greatly enhancing the overall impact and providing a much more intuitive link between the computer and the human participants.

What is Augmented Reality (AR)?

Pokémon Go? Snapchat facial filters? These are a few of the perfect examples of Augmented Reality. The basic idea of AR is adding digitized virtual content to your real-world object or live camera feed. This creates an illusion of holographic content being a part of your physical world. 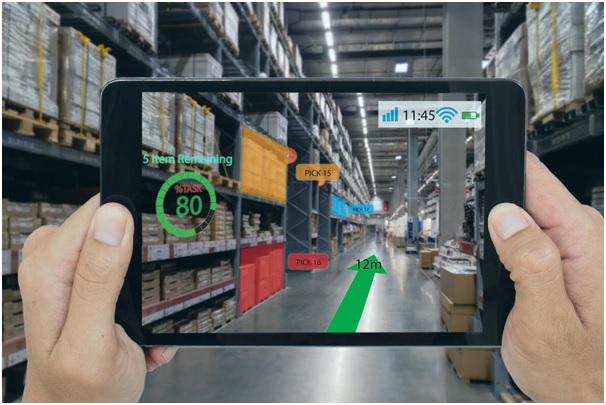 AR is a technology that overlays computer-generated images (typically 2D, 3D image, video, or information) to the real-world scenario. And how is it overlaid? This depends on the nature of experience and the hardware you are looking at.

What is Mixed Reality (MR)?

Mixed Reality is quite new in the industry. It covers both Augmented Reality and Virtual Reality. 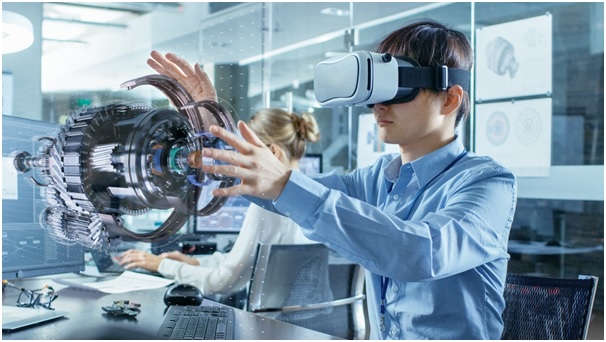 Generally, there are two categories, which can be referred to as Mixed Reality (MR).

What is the difference between Augmented Reality (AR), Virtual Reality (VR), and Mixed Reality (MR)?

Augmented Reality adds a computer-generated image to the real world while Virtual reality, on the other hand, adds you to a computer-generated world. With the help of VR devices such as Oculus Rift, Samsung VR headset, Google Cardboard, etc you can have an illusion that you are placed in Hogwarts or even on Mars.

While Mixed Reality as its name suggests, is a mixture of both. Combining physical and digital elements with simultaneous movements and changes. You just do not see the computer-generated image; you can interact with it. Think of any sci-fi movie where a character is building a plan using holographic images.

How Finance and Accounting Industries are using VR, AR, and MR technologies?

Top Features to Look for in a Video Annotation Tool

The gaming industry isn’t the only one to leverage the potential of AR, VR, and MR. This booming technology has shaken everyone with its smart applications. Research has proven that many people – Millennials and Generation Z specifically – trust the new technologies and intend to use them at its best.  The market size of AR, VR, and MR is expected to reach $570.42 Billion by 2025. This number boosts confidence for the long-term investment in this technology. 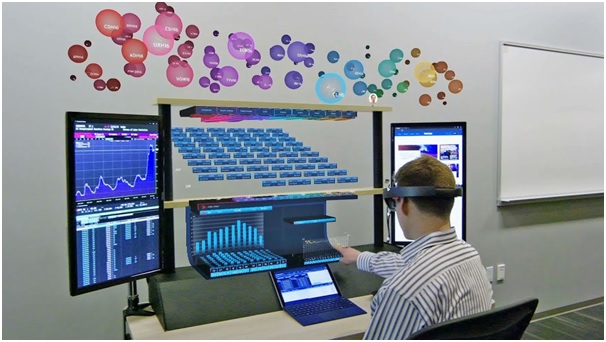 Organizations are trying to incorporate such technologies extensively into their businesses. Now let’s see how you can leverage out of VR, AR, and MR.

With the increasing complexities of the Finance and Accounting industries, there exists an enormous amount of data to be analyzed. Implementing trading visualization and wealth analysis in a 3D virtual environment grabs more attention from investors to the business. One of its use-cases is Salesforce using Oculus Rift to create a 3D simulated environment for data analyzation. Another example, where Fidelity Labs created a virtual world called ‘StockCity’ which shows stock portfolios turning into 3D virtual cities.

AR-powered systems can enhance communication and connection with clients. This extends your connections with customers. One of the ideas to replace physical Bank Branches with AR systems, Wells Fargo has built an AR application system with VR headsets that enable customers to interact with bank advisors in a virtual 3D space laid over reality. Another real-life implementation is by Comarch, a Polish Finance Tech Company, that created an AR ecosystem for investors and owners to communicate via smartwatches or smartphones with VR headsets where data can be presented in a virtual meeting.

Considering both employees and customers from a finance background, education and learning play an important role. But here comes a huge difference between learning from books, manuals, or lectures, and taking experience from a virtual environment. GTE Financial in Florida decided to create a user-friendly virtual 3D environment where customers can learn about lending, financial products, and its impact on short, medium, and long terms. The platform is named as GTE 3D it’s motion graphics, modern designing and music worked as a crowd puller. Visitors felt it was an easy and fascinating way of learning.

Presenting another medium for payment transactions. Few companies are making an effort to implement virtual payment. ‘MasterCard’ collaborating with ‘Wearality’, a VR company is working on creating a world where customers can make payments without leaving the VR world. This idea can be extensively used in e-commerce businesses where customers can make purchases for clothing, accessories, etc in the virtual world.

MR can play a vital role in training a new generation of accountants for the future. Every company intends to recruit top talent and experienced employees. So, to train and gain experience with virtual clients, students can improve their communications and gain experience before dealing with an actual customer. Using such a platform builds confidence among students. Moreover, with such implementation students not only focus on the theoretical part, but it also graces practical knowledge of a particular concept. Regular practice makes students and employees avoid mistakes. With interactive MR systems employees can experiment on their new business strategies and their impact.

Such technologies aspire to the concept of multiple realities. With continuous practice several strategies can be improved or even enhanced. This also reduces the number of errors and mistakes by humans. Using AR, VR, and MR to manage and represent data, providing better customer service and training employees carries much potential and worth. Companies should keep heads up and be aware of new technologies to avoid the risk of losing future clients.

Elena Smith is a career-oriented woman and passionate content writer. She is knowledgeable in areas including the latest technologies, QuickBooks Hosting services, cloud computing and Cloud accounting. When it comes to writing she has the ability to stamp out gobbledygook and makes business blogs understandable and interesting.

How AI is Stimulating the Vision of Digital Marketing

7 Steps To Troubleshoot Your Mac If It Is Not Working

External VS Internal Penetration Test: All The Differences

Top 10 IT Staff Augmentation Companies in 2023