Intel amazed the world with its breathtaking drone display in the Superbowl Halftime show back in 2017. 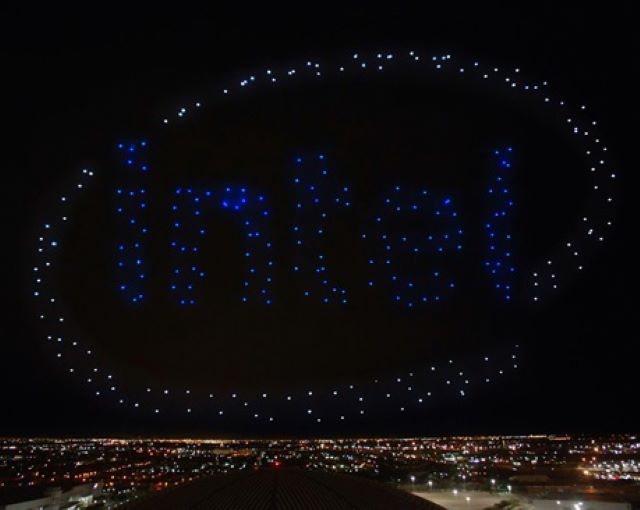 Now as more and more people are using drones to create illustrations, ads and even having drone displays to replace fireworks, Intel has filed for a patent to make this process easier.

The patent (US PAT. NO. 11,217,126) talks about a system through which multiple drones can be used to project desired content into the sky creating a temporary sign or signal of sorts.

While initially it took a lot of effort on the coder’s part to assemble all the drones into a formation because it required a lot of coding and calculation to assign coordinates for individual drones, this system will allow the drones to be configured with sensors. This would allow the configured sensors to detect the required formation.

But the patent isn’t limited to that. The drone sensors will also detect the audience viewing it and arrange their formation and move along as the audience moves, thus allowing the drones to continue presenting the same signage as the crowd moves.

The image above shows how the projection made by the drones is following along with the audience as they move.

The patent mentions another use of drones which is advertising. We usually have printed billboards, which remain static and only show the single printed thing. We do have digital billboards as well but their position remains the same.

Intel plans to use their drones to project images, text, videos and maybe even audio which can be projected onto any screen or surface. Another added benefit of advertising through drones is that the display created by them can move along with the crowd instead of remaining rooted at one place.

This image from the patent illustrates how multiple drones can be used to create a single illustration or how individual drones can project separate respective images which could all be parts of one big projection.

Along with that the size of the projection created by the drones can also be altered to suit the location where it is displayed. For instance the projection can be made smaller for crowded areas with limited space but the projection made by the same drones can be turned larger for areas like highways where the message needs to be big, clear and easily legible for the cars zooming by.

The image above from the patent pages shows the drones could potentially project images on the side of a building to promote “world series games.” A technology like this would allow companies to advertise virtually on any surface. This is another example of how multiple drones could be used to create a single projection and how individual ones can project multiple` which create one big signage.

How to Choose a Solar Panel System for Your Roof

And since printed or painted signboards and billboards take a lot of effort to not just create but also to put up, changing them frequently isn’t very feasible. But signage through drones would change that as it will allow businesses to change their ads or signs on the go.

Another feature that Intel plans on implementing is that when a group of drones is displaying a sign or projecting information, one of the drones can take the role of doing quality assessment.  It can take pictures/video from the audience level and determine if the sign is oriented properly, is bright enough and is gathering sufficient interest.

The drone could also run tests to see which signage is performing best and garnering the most reaction out of the audience. The drone can then adjust the content displayed accordingly.  The drones may also continuously analyze the audience (e.g., gender, age or other features.) and tailor content accordingly.

This would make the advertisements or signs to be highly personalized and directed and even  allow the signage to be created ad hoc and based on potential audience’s movement pattern. The surface could be ad hoc as well, created and located to be in direct line of sight of a potential audience.

The digital signage created by the drone can also be optically adjusted to compensate for ambient light or lack of light.

All of this could bring a revolution to the advertisement, billboards and sign industry. The ads can be more targeted and directed.

This patent is also inline with Intel’s emphasis on their drones. The company has been working to market their drones, which fall under two categories- Premium and CLassic. Intel claims that both are purpose-built for safety, feature LEDs that produce over four billion color combinations, and are designed to tolerate real-world performance conditions.

Intel is also working on a technology called “Loihi Chip” which will be designed to mimic biological functions to approximate some functions of a human — or bird — brain with multiple neural units. The company is currently running their tests on drones to give them faster and low powered neural system capabilities. All of this falls under Intel’s drone Vision.

Mike Davies leads the Neuromorphic Computing Lab at Intel, where Intel is building the Loihi chip. “Conventional camera technology that we take for granted takes repeated snapshots of the world — frames. There’s not much, if any, state that is preserved from the previous frames that have been seen.” shared Davies in an interview.

Apart from this, many believe that drones fireworks could replace fireworks in the coming years. Since fireworks have a bad impact on the environment and cause excess air pollution, it is estimated that many may opt for drone displays since they can create numerous customizable formations and have bad environmental impact.

What makes it more plausible is the recent bans of fireworks in India and China on Diwali and Chinese new year respectively considering the environmental impact. Drones further have the possibility of becoming more prominent in the former country with recent new rules implemented in the Drone Industry in India.

But one thing is for certain, with technological developments like this, we may be seeing much more drones in the future.

Oorja Pandya is a Marketing Associate in GreyB Services, a Patent Landscape Service Provider with offices in Singapore, India, and the US

Tesla Plans To Use LASERS Instead of Windshield Wipers