Next week, when Microsoft releases Windows 10, the latest version of the company’s operating system, the software will offer a mix of the familiar and new to the people who run earlier versions of it on more than 1.5 billion computers and other devices.

There will be a virtual assistant in the software that keeps track of users’ schedules, and Microsoft will regularly trickle out updates with new features to its users over the Internet. And the Start menu, a fixture of Windows for decades, will make a formal reappearance.

But one of the biggest changes is the price. Microsoft will not charge customers to upgrade Windows on computers, a shift that underscores how power dynamics in the tech industry have changed. 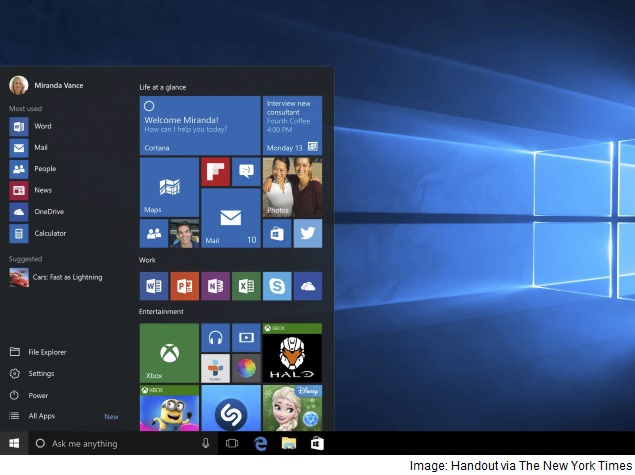 The decision to make free a product that once cost $50 to $100 is a sign of how charging consumers for software is going the way of the flip phone. Companies like Google have crept into Microsoft’s business with free software and services subsidized by its huge advertising business, while Apple in recent years has made upgrades to its applications and operating systems free, earning its money instead from hardware sales.

Microsoft, whose core business is software, sought to buck this trend for as long as it could. But the inroads made by companies like Google and Apple have put intense pressure on Microsoft to find new ways to profit from some of its big moneymakers.

“It will confirm peoples’ expectations that you don’t pay for operating systems,” Jan Dawson, an analyst at Jackdaw Research, said of Windows 10. He added, referring to Microsoft’s devices: “They’re basically killing off their ability to monetize anything on the consumer side, aside from Xbox, Lumia phones and Surface.”

Already, the company has been giving away mobile versions of Office apps like Word and Excel, an effort to give the software some life in a category of devices where the company is weak. And it has made Windows free to companies that make smaller devices, mainly smartphones and tablets, to get more of them to use the software.

The thinking behind the Windows decision follows a similar logic. Microsoft decided to sacrifice some of its Windows revenue for the simple reason that the company needs people using Windows 10 – and fast. PCs have lost momentum in many ways to smartphones and tablets in recent years.

The company’s last operating system, Windows 8, did not revive the market and might have made matters worse with a bold redesign of its interface that turned off some users.

During the second quarter, global PC shipments declined 9.5 percent, according to Gartner, the technology research firm. Gartner estimates that there will be about 300 million PCs sold this year and 1.9 billion mobile phones. Windows ships on less than 3 percent of the smartphones sold globally, with Google’s Android and Apple’s iOS accounting for most of the rest.

“Consumer Windows is fighting for relevance in a world where Apple and Android are the dominant OSs,” said Bill Whyman, an analyst at Evercore ISI. “That’s the challenge.”

An operating system is only as good as the programs that can run on top of it. But in recent years, Windows has become an afterthought for many software developers, who have turned to the huge and engaged audience on smartphones. That shift has left Microsoft in a precarious position with consumers in recent years.

To generate more interest from developers, Microsoft has designed Windows 10 to run on PCs, smartphones and other devices, which is meant to make it easier for developers to write apps that run across all of them. And the company has sworn there will be 1 billion devices running the software within the next two to three years, giving developers a huge potential market to reach with their creations.

“I think we will see really huge adoption” of Windows 10, said Kevin Sather, director of product marketing for systems at Razer, a maker of high-end gaming computers and other devices.

The benefits of fast and free adoption of Windows 10 could well outweigh the revenue Microsoft is giving up. The company does not disclose how much upgrade revenue it normally makes from a new operating system, but analysts estimate that it is small compared with the other ways the company makes money from the operating system.

Amy Hood, Microsoft’s chief financial officer, recently told investors that the company expected to make about $15 billion in revenue from Windows during its last fiscal year, which ended June 30.

Most of that revenue was related to the corporate market, where Microsoft’s position is stronger than it is among consumers. About a quarter of Windows revenue was from volume licensing deals with big business customers, who typically pay for rights for Windows upgrades over several years, along with the ability to manage a multitude of users over corporate networks.

Most people pay for Windows, whether they realize it or not, when they buy a new PC with a copy already installed. Nearly half of Windows revenue came from PC makers who licensed the operating system to put on machines aimed at the professional market, while a little over a quarter, about $4 billion (roughly Rs. 25,416 crores), was from consumer PC makers.

“The piece they’re giving away is the piece nobody is buying anyway, which is the upgrade to Windows,” said Steve Kleynhans, an analyst at Gartner.

Windows remains the dominant operating system on PCs, and unless that starts to change, Microsoft is unlikely to stop charging computer makers for the software. Still, competitors are biting Microsoft’s ankles in the consumer market, forcing the company to cut prices in some areas.

Last year, Microsoft cut fees for the operating system for manufacturers in the low end of the laptop market, where Windows faces growing competition from inexpensive devices known as Chromebooks, which run a free Google operating system.

The company’s chief executive, Satya Nadella, also made Windows free on devices with screens smaller than 9 inches, a category that consists mainly of smartphones and tablets, along with some laptoplike products.

Microsoft executives have started talking up new ways to make money from Windows. Executives see advertising revenue from Bing, the company’s Internet search engine, which is enmeshed in various functions within Windows, as one avenue. In addition, if the company can get enough people buying games and other software through the Windows app store, its cut from those transactions could become meaningful.

The company is pursuing such trade-offs in other areas. With Office, for example, Microsoft gives away mobile versions to get people to pay for a subscription to the product, which gives them the ability to use the software on PCs in addition to online storage and other benefits.

Microsoft is also seeking to participate in the hardware side of the technology business, with its Surface tablet computers and Lumia smartphones, though it recently announced plans to scale back the smartphone business after weak sales.

The company also has a broad array of software products aimed at the corporate market, from databases to messaging to cloud computing services, that are doing well and could help offset a loss in revenue from the free upgrades.

But John DiFucci, an analyst at Jefferies, said Microsoft’s grip on the business market may be less solid than generally assumed. He said he had noticed in meetings with investors that more and more bring iPads, Android tablets and Chromebooks to take notes.

“There’s some risk there I think people are ignoring, or at least not appreciating,” he said.

Windows 10 Home vs. Windows 10 Pro: What’s the Difference, and Which One Is for You?