Vivo Adds A Mini Drone Camera To Their Mobile

Since our mobile phones got cameras, they have been our go to device for taking photos and shooting videos. And with time, the cameras on our phones have only gotten better. Companies have been coming out with phones containing multiple cameras as well, as cameras are one of the most prominent factors a user considers while buying a phone.

But one of the challenges that mobile companies have been trying to work on is incorporating a front camera in the screen in a subtle way to provide their users with a smooth, continuous. notch-free screens. Many mobile manufacturers have tried to get rid of the camera notch all together from the screen by using motorized pop up cameras.

One such company that puts a lot of emphasis on their phone’s camera is Vivo. And to tackle the problem of camera notch, Vivo has come up with a very radical approach.

A patent filed by Vivo discusses the technology for a drone-like detachable camera module on a smartphone.

It will essentially be a very small drone camera that will be housed within the smartphone. Similar to a motorized pop up front camera, the phone will have a pop up slot containing the detachable drone. The drone will consist of a camera and infrared sensors (to avoid bumping into things ) and four propellers (for a balanced flight). The primary role of sensors would be to stop the small drone from bumping into things while in flight. 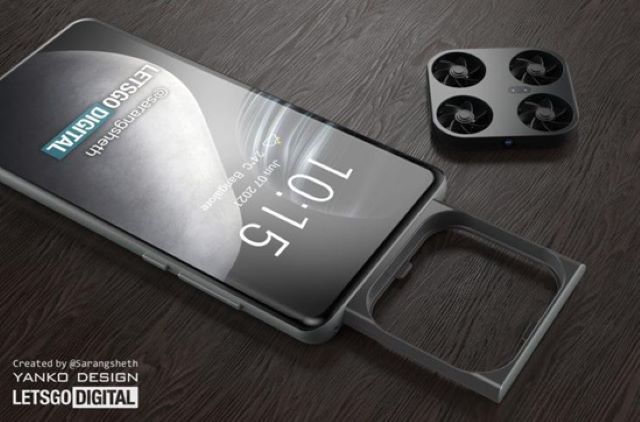 The detachable flying camera module will comprise four propellers that will help it fly. It will also consist of a battery pack that will be separate from the smartphone’s battery. The flying camera may have the feature of automatic follow mode where it will follow the user automatically while flying and might also feature air gestures.

This experimentation with phone camera technology isn’t new for Vivo. Vivo X50, a phone that falls under the higher range of Vivo phones flaunts a camera propped on a tiny gimbal inside the body (a gimbal is a device that allows your camera to rotate smoothly along an axis that stabilizes your camera.)

How to Choose a Solar Panel System for Your Roof

While the idea of having a small drone is inside your phone is very cool, one has to wonder about the battery consumption of the drone and its impact on the phone’s battery. It’s possible that the mini drone will have a separate socket for battery charging, but its highly likely that it will charge itself from the battery source of the cell phone which will affect the phone’s overall battery life and performance.

Also, since the drone has a slot through which it comes out of the phone, it eats up space within the phone, the space which is usually reserved for the battery.

Another thing to consider is the return of the drone back to its slot. While it will be easy for the drone to take flight once the slot within the phone opens up, we don’t know how it will find its way back to the phone or if the mobile owner will have to manually place it back in the slot.

Apart from innovations in camera technology, Vivo is also dabbling with folding screens and according to leaked pictures, might release a folding screen phone soon called “Vovo X Fold.”

The X Fold features an inward folding screen which opens into a square shaped screen, with no visible crease in the middle of the screen folding panel. Its complex hinge mechanism is the key component for the gapless folding display.

With new rules implemented in the Drone Industry in India, implemented to regulate and increase the use of drones in the country for various purposes, it remains to be seen if this mini drone will come under the regulations that other drones are supposed to implement. Vivo may especially have to follow these rules if they go through with their plan of manufacturing mobiles in India locally for global export.

It will be interesting to see if Vivo goes through with the idea, and if they do,will the technology be stable enough for use. The innovative idea may seem very lucrative to photography enthusiasts but we’ll have to wait and see what becomes of the patent.

Oorja Pandya is a Marketing Associate in GreyB Services, a Patent Landscape Service Provider with offices in Singapore, India, and the US.

Tesla Plans To Use LASERS Instead of Windshield Wipers